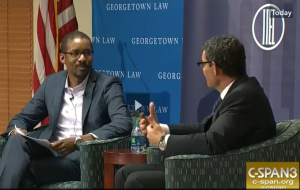 In a wide ranging conversation on Russia, North Korean and Venezuelan sanctions, David Cohen speaks with IIEL Faculty Director and Georgetown Law professor about US sanctions strategy in both Obama and Trump administrations for CSPAN. In the discussions Mr. Cohen discusses bilateral sanctions, and how sanctions approaches can be multilateralized.

In regards to the TPP, Trump fulfilled one of his campaign promises right out of the gate by withdrawing the U.S. from the Trans-Pacific Partnership. Trump has long maintained his stance against multilateral trading agreements.

He’s been in favor of bilateral trade agreements. And maybe even minilateralism.

However, multiple Latin American countries are potentially in favor of the TPP, even without the United States, though not all.